Games like Captain’s Coming and Simon Says are great ways to help children practice listening carefully to instructions. In this game children must learn and understand new vocabulary, they need to cooperate with their peers and they will get lots of great exercise—while they have a whole lot of fun!

Read the instructions carefully to familiarize yourself with the rules. You may lay out tape on the ground in the shape of the deck of a ship if you like (at least 15 yards x 10 yards), although it is not necessary. 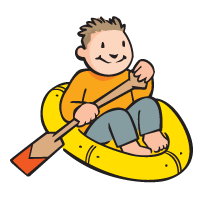 Ask your students if they have ever been on a boat before. Are there any special terms that sailors use while they are on their ship? Make a list of any terms that your students come up with. If they are unfamiliar with any nautical terms, tell them that you’ll be teaching them some as part of this game.

Can you be the last sailor standing on this ship? Listen carefully to the instructions, and do just as the captain says!

If The Caller Says – Then Each Shipmate Does:

Port – Go to the left side of the “ship”

Starboard – Go to the right side of the “ship”

Rowboat – Quickly find a partner (2 kids total), sit on the ground one behond the other, and “row”

Jellyfish – Get down on the ground, on our back and shake your arms and legs in the air

Octopus – Quickly find 7 partners (8 kids total), gather in a circle and have each person stick a leg out

With “Rowboat”, “Lifeboat”, and “Octopus”, if there are odd numbers, those in odd numbered groups are out of the game. Ex. If you find an octopus with 7 or 9 people in it, the whole group is out (life is tough on the open sea…). Any sailor who does something different from what the caller said is out of the game. When there is 1 player left, the game is over. If there are several players left and it seems like it will be too difficult to “trick” them, you can also declare multiple winners and end that round. For some of the commands, like “Jellyfish”, children may prefer not to get down on the ground – come up with an alternative way of acting that command out (for example, children can act like they are “floating” around the room, just like jellyfish “float” in the water.

After playing once, gather everyone together to talk about the game. Was it easy or hard to remember the instructions? What was their favorite command to do?

Play the game again with you as the caller, or reward the last round’s winner by asking if they would like to be the caller. After players have mastered the basic commands, you can try adding new ones. Ask you students to come up with some new commands, but stick with the theme of being on a ship!