Invent your own constellations!

Constellations are pictures that people have imagined in the patterns of the stars. They are now accepted scientific ways of organizing our view of the night sky. But this idea that scientific classifications, like constellations, could have begun with imagination might surprise people. Albert Einstein once said, “Imagination is more important than knowledge.” Pretty smart. This activity invites children to look at star patterns and imagine their own new constellations, while practicing STEM skills like observing, recognizing patterns and thinking creatively. This kind of creative activity encourages children to make personal connections to objects in the sky, and to seek out their new constellation when they look up at night.

Print out the Star Sheets included with this activity, or create your own. You’ll want many different constellations, and a few copies of each one so that each child can choose one or two that they like. Print out the Constellation Pictures (one copy per team is enough) or show them on a computer screen to the whole group.

You might also print out or show on-screen photos of existing constellations as seen in the sky, like Orion, Ursa Major, and Cassiopeia if you live in the Northern Hemisphere; or The Southern Cross and Centaurus in the Southern Hemisphere. A quick web search will give you lots of results. It is best to use constellations that your children can see when they look up at the night sky; and helpful to show an image of the stars that make up a constellation, alongside a photo with lines drawn on connecting the stars of the same constellation. See Suggestions below for some links to get you started. 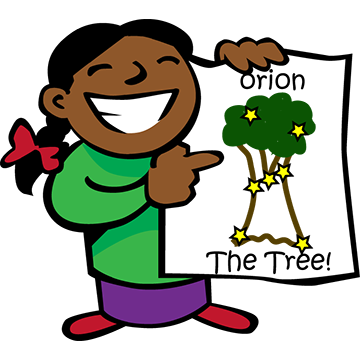 Constellations are pictures that people have imagined in the patterns of the stars. Many constellations we are familiar with were invented a long time ago by people looking up at the sky, connecting the stars they saw with pictures they imagined. Ask your students, “What if you could rename the constellations? Would they still be named after the same animals and people they are now? Or do you see different pictures when you connect the dots?”

Invent your own new constellations!

When everyone has completed a constellation, bring the larger group together and ask them how it went. Was it hard or easy to imagine a picture using the Star Sheet? Did they choose something from their own lives, something they’ve heard of before, or something totally imaginary? Ask if anyone would like to share their new constellation drawing and its name.

After everyone who would like to share has had a chance to, you can send them back to create more. Hang them all up on a wall and admire the beauty. You could also challenge your students to match each Star Sheet constellation with the real constellation that it came from.