It takes a very steady hand!

This activity introduces students to a Native American game called “Ring and Pin”. Almost every Native nation across North America has a version of Ring and Pin that children traditionally played, and sometimes still play. Some of the games have different names, and most of them use different materials. But what they have in common is that every Ring and Pin game is played basically the same way, and all of the games are designed to help children develop eye-hand coordination (and have fun!).

It is suggested that rather than purchase materials, you simply gather whatever you can find around your program. Traditionally, these Ring and Pin games were created by Native American children and adults using whatever they had available to them. If you do the same, it will provide a much more interesting basis for discussion about the activity and its cultural context. If you have no craft sticks, maybe pencils, chopsticks or even sticks from outside might do (make sure pencils are NOT sharpened). The rings can come in many forms (see below). Challenge the children to come up with their own creative designs based on what is available to them.

Because this game has been widely played across many cultures, there are countless different materials and basic ways of playing. The general idea of all of these games is that the player holds a stick with a cord or string attached to it, and a ring, several rings, or some other target fastened to the other end of the cord. The ring or target is thrown into the air, and the player attempts to spear it with the stick or “pin” at the other end of the cord. See Suggestions (in the “Make it Better” step) for information about different materials used in different Nations. 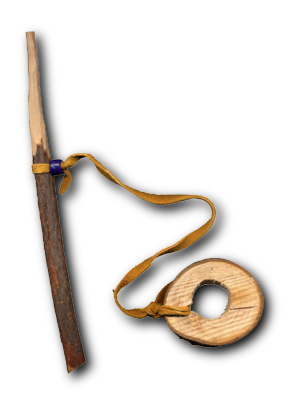 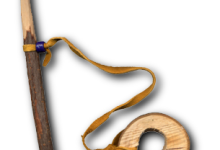 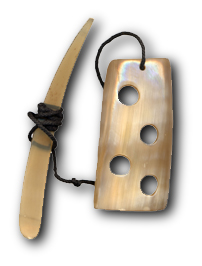 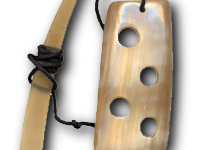 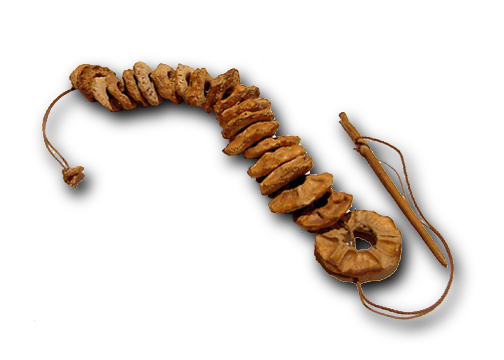 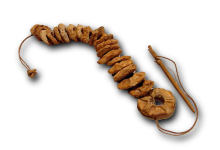 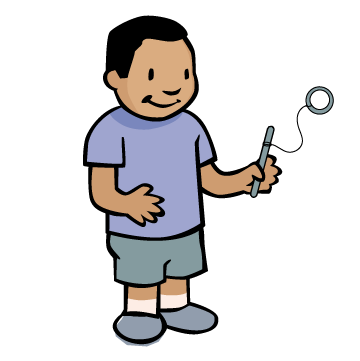 Ask your students what kinds of games they like to play. Do these games teach them anything? What sorts of skills do they learn? Tell them that today they are going to learn how to make a game that children in Native American tribes all across North America have been making and playing for a long time. Children who are Native American play all of the same kinds of games that your children listed—video games, board games, card games, etc. But there are also games that have been played by their families and their culture for hundreds of years (and maybe longer!). One of these games is called “Ring and Pin”, and it is designed to be fun and also to teach children eye-hand coordination.

Make your own game out of the materials you have in your afterschool program, and play a kind of game that Native American children from some tribes all across North America used to play!

After students have spent 15-20 minutes experimenting with the materials, bring them together to talk about what they have discovered. What kinds of ring and pin games are they trying to make (one ring, many rings, or a “target”)? Do some materials work better than others? If you provided different kinds of string, do some strings work better than others? If not mentioned, ask them if the weight of the “ring”, target or rings makes a difference. How about the length of the stick? How easy or difficult should their game be? If it is impossible to do, is it much fun? What if it is too easy to play?

Have students return to complete their games, then bring them all together to show off what they created, and take turns playing each others’ games.

“The Wampanoag people are alive and well. We still have our spiritual ceremonies and dances and songs and languages. We have our regalia in which we dress ourselves for celebrations in the manner of our ancestors. We raise our children to be proud of their culture.

When teachers and students imitate us, our dances, our ceremonies, our clothes, it disrespects us and trivializes our way of life. If you wish to respect and honor Native culture, please don’t mimic our culture by engaging in pretend Indian ceremonies or wearing outfits made of fringed paper bags and paper feather bonnets. It takes a great deal of our time to correct these actions and we need your help. Please show your respect by replacing these activities with programs that educate children about respect for us and respect for the earth. That would be excellent. Thank you for your attention to this matter.”

In respect for all cultures of the earth, I am,