Looking up at the sky has inspired scientists, artists, musicians, poets, writers, and cultures around the world for thousands of years. Few things are as universally stirring, and while cultures and landscapes may vary around the world, the sky above us unites us all and finds expression in many forms. One of these forms of expression is haiga, which is a companion art form to haiku. Haiga paintings are inspired by listening to haiku poems. Try this activity after doing the Sky Haiku activity from this curriculum, and give your students another chance to reflect on the sky and the universe through art.

Make sure to do the Sky Haiku activity from this curriculum before trying this activity.

Print out some sample haiga images you can find on the Internet. Try to choose haiga that are composed of both writing and illustration, particularly those where writing (calligraphy) is part of the artistic expression as much as the illustration is. Also, if possible, find haiga images with the sky or objects from the sky in them. 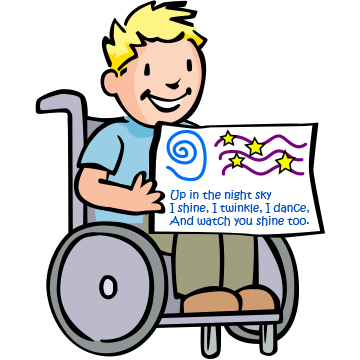 *If sumi ink, calligraphy brushes and other materials are not available, you can use whatever similar materials you have at your program.

Read a haiku about the sky to your students, or have one of your students read theirs to the group. How does the haiku make them feel? What images come to their minds when they close their eyes? Tell your students that some haiku poets in Japan also created paintings to go along with their poems. These paintings are called “haiga”. Show some sample haiga images to the group. If the haiku in the samples you show them is in a language they cannot read, ask them what they think the poem might be about. If you would like to give them more information on haiga, you can read them this description:

Haiga is a style of Japanese painting that includes both writing (calligraphy) and illustration as artistic expressions on paper. It includes three elements; haiku, illustration, and calligraphy. The haiku is written, and the illustrated images are inspired by, or were what inspired the haiku. In haiga, often the arrangement of elements is playful. An artist often adds a red seal stamp mark (also, called a chop) beside the signature when it is complete.

Create a haiga to go along with your sky haiku.

After 5 – 10 minutes, gather the group together and ask them how they are figuring out what the paint. What parts of their poem are inspiring their paintings? If anyone is having a hard time getting started, ask if they would like to read their haiku to the group and ask the other kids for ideas of what to paint (if they do not wish to read their haiku, you can read it to yourself and make suggestions to them, telling them what images the poem inspires for you).

Talk to your students more about the third element of haiga (along with the haiku and the drawings they are making) – the calligraphy, or the WAY that they write the words in their haiku. The art and form of writing, often with a brush and ink, is called calligraphy. Calligraphy is a way to express the meaning of words and, to express yourself through writing. Encourage your students to think about the position of their illustrations, and to find their own way to express the meaning of their haiku not only through those illustrations, but also through how they choose to write out the haiku next to the illustration. Encourage children to create their own focus and calmness as they proceed through their calligraphy expression. Keeping a good body posture such as lifting their back up straight and keeping a soft natural breath are also encouraged during the calligraphy process.

Send your children back to finish their sky haiga. Make sure they sign their work when they are done. Hang the finished products wherever you can, or lay them all out on a table together, and have the artists talk to each other about their creations. They can ask each other questions like as “What characteristics of the sky did you try to express through your haiga? Is it day or night? What season is it? Where is it? What’s the weather like?”, etc.